If you ever want to see an example of the stark difference between the two political parties, sometimes you can find it in little things: just look at some of the guests invited to President Obama's State of the Union address last night.

The Democrats invited a Syrian refugee who has been taken in by the U.S. as he fled the carnage in his homeland. The Republicans invited Kim Davis, the Kentucky clerk who tried to stigmatize gay couples and treat them as second class citizens when they sought a marriage license in her county. 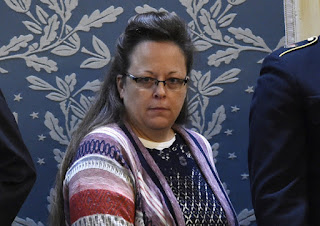 One represents kindness and mercy. One hate and bigotry.

And not just hate and bigotry, but proudly willing to announce it to a national tv audience.