This seems about right

You can tell a lot about a President by how they choose to spend their retirement.

Although he wasn't the most effective President, Jimmy Carter has widely thought to have been one of the best ex-presidents, using his influence, fame and connections for a variety of good causes, most notably working (literally hammer-in-hand working) with Habitat for Humanity to build homes for needy folks.

Bill Clinton was not only a great President, he's been a great ex-President. His Clinton Foundation works tirelessly on a variety of good projects around the world, with a special emphasis on eradicating preventable diseases, like malaria.

And our most recent chief exec, George W. Bush? Ahh, Boy George never lets you down.

Probably the worst president in the last 100 years, he left his successor an economy in the crapper and two ongoing Middle East wars, what's he doing with his cachet as one of the most famous and well-connected men in the world? Surely something positive to try to make amends for his disastrous tenure. 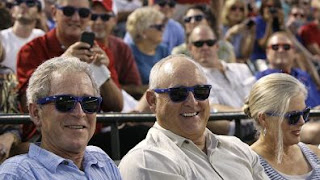 How about Most Seamless Transition from Worst President to Worst Ex-President, do they have that category?
Posted by J at 11:35 PM


Having read this I thought it was rather informative. I appreciate you spending some time and effort to put this information together. I once again find myself spending a significant amount of time both reading and leaving comments. But so what, it was still worthwhile! facebook.com login