The Democratic candidate won the special election in NY-26, the FIRST time a Dem has ever won that district, one of the most conservative congressional districts in New York State.

It's one of only 4 districts in New York that voted for McCain over Obama. It's an area where the Republicans have a 7-point voter registration advantage. It was a race in which right-wing special interest operations, like Karl Rove's thuggish group, outspent the Dems 2:1 in advertising.

And, ooops, they still lost.

Now we know why food prices went up

New York magazine has a fascinating behind the scenes look this week at the general sleaziness of Roger Ailes and his Fox News Channel, but one anecdote stands out.

It's a description of how Ailes was trying to recruit N.J. governor Chris Christie to enter the 2012 GOP Presidential race. (Because, you know, news channel chiefs do things like that.)

A few months ago, Ailes called Chris Christie and encouraged him to jump into the race. Last summer, he'd invited Christie to dinner at his upstate compound along with Rush Limbaugh, and like much of the GOP Establishment, he fell hard for Christie, who nevertheless politely turned down Ailes's calls to run.

Holy shit. Ailes, Limbaugh and Christie at one dinner table?

Can you imagine the poor chef and wait staff who had to serve that herd of lardasses.
Posted by J at 2:31 PM 1 comment:

Finally I get my miles

Only a mere EIGHT freakin' months after placing an order for Omaha Steaks through the Continental OnePass shopping site, I finally got the miles I was supposed to get.

Well, correction - half the miles. The bonus double points apparently won't be added for another 30 days.

It apparently takes 9 months for those.

And I loved how Continental tried to throw Omaha under the bus, saying the steakies had awarded the miles to another account. Hmmm, yeah, I don't think so. Omaha is always great to deal with. Continental, not so much.

But hey, the airline is merging with United. I'm sure becoming twice as big will make it much more responsive.
Posted by J at 12:43 AM No comments: 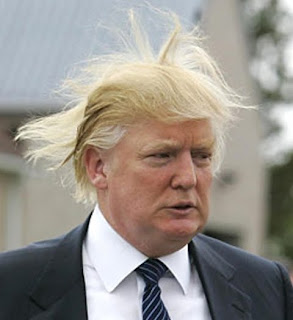 My favorite picture of Trump ever.

I really hope he throws his hat into the ring.

If only to keep that rat's nest on his head from doing that again.
Posted by J at 12:37 AM No comments: