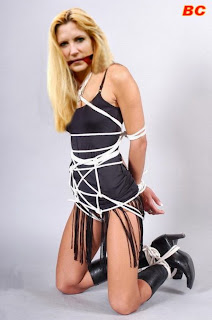 Those wacky Republicans, they sure like moralizing about everyone else's sex life, but they seem to have quite a freaky side themselves.

Just days after it was discovered that the RNC treated high rolling donors to a wild night at a bondage/lesbian/table service club in West Hollywood, it turns out they "inadvertently listed a phone-sex number on a fund raising letter sent to potential donors. People who tried to call the committee were instead offered "live, one-on-one talk with a nasty girl" for $2.99 a minute."

But I guess we shouldn't be too surprised. This, after all, is the party of Sen. David Vitter, busted for patronizing prostitutes both in his home state of Louisiana, and in D.C. - hookers, by the way, who specialized in clients who liked to wear diapers (eww).

And the former Senator, Larry Craig, he of the infamous "wide stance" in the men's room at the Minneapolis airport bathroom.

And Sen. Larry Ensign, the Nevada GOPer who was caught boinking a married staffer (she was married to another of his staffers, no less).

And how about Mark Sanford, the S.C. luv guv of the Appalachian Trail. And we can't forget Newt Gingirch, who is a species all to himself (on wife #4, I believe).

And this is the party that impeached Bill Clinton for getting a b.j.

They really are the most hypocritical bunch of scum out, aren't they?
Posted by J at 3:20 PM

Is that a real picture or Photoshop?? If real - yeaaaahhh! lol

lol who would think that was a real pic?