We're living in a hologram? 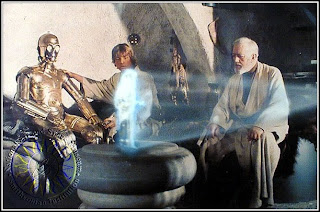 This is a fascinating article. Scientists are theorizing that we - the world as we know it, and us - are actually hologram depictions of events happening somewhere else in the universe.

For many months, the GEO600 team-members had been scratching their heads over inexplicable noise that is plaguing their giant detector. Then, out of the blue, a researcher approached them with an explanation. In fact, he had even predicted the noise before he knew they were detecting it. According to Craig Hogan, a physicist at the Fermilab particle physics lab in Batavia, Illinois, GEO600 has stumbled upon the fundamental limit of space-time - the point where space-time stops behaving like the smooth continuum Einstein described and instead dissolves into "grains", just as a newspaper photograph dissolves into dots as you zoom in. "It looks like GEO600 is being buffeted by the microscopic quantum convulsions of space-time," says Hogan.

If this doesn't blow your socks off, then Hogan, who has just been appointed director of Fermilab's Center for Particle Astrophysics, has an even bigger shock in store: "If the GEO600 result is what I suspect it is, then we are all living in a giant cosmic hologram."

The idea that we live in a hologram probably sounds absurd, but it is a natural extension of our best understanding of black holes, and something with a pretty firm theoretical footing. It has also been surprisingly helpful for physicists wrestling with theories of how the universe works at its most fundamental level.

The holograms you find on credit cards and banknotes are etched on two-dimensional plastic films. When light bounces off them, it recreates the appearance of a 3D image. In the 1990s physicists Leonard Susskind and Nobel prizewinner Gerard 't Hooft suggested that the same principle might apply to the universe as a whole. Our everyday experience might itself be a holographic projection of physical processes that take place on a distant, 2D surface.

The "holographic principle" challenges our sensibilities. It seems hard to believe that you woke up, brushed your teeth and are reading this article because of something happening on the boundary of the universe. No one knows what it would mean for us if we really do live in a hologram, yet theorists have good reasons to believe that many aspects of the holographic principle are true.
- NewScientist

Frankly, I wish the real me in the 2-dimensional world would hurry up and find his gloves, it's freezing here in this hologram world and I had to go out without them today.
Posted by J at 4:17 PM

For sure you didn’t here about me yet,
friends call me Nikolas.
Generally I’m a venturesome analyst. all my life I’m carried away by online-casino and poker.
Not long time ago I started my own blog, where I describe my virtual adventures.
Probably, it will be interesting for you to read my travel notes and reports about winnings and losses on this way.
Please visit my blog. http://allbestcasino.com I’ll be interested on your opinion..