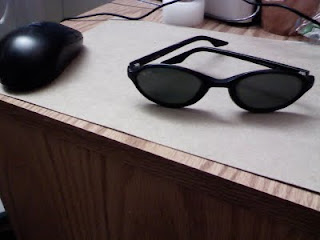 Happiness is finding something you thought you had lost in Vegas several months ago. No, not my innocence. My cool pair of classic Ray Bans, which I found buried in one of the 38 pockets in my laptop bag.

At least it wasn't an 8-year-old altar boy

This girl is scary...but yet somewhat intriguing. You can't go wrong with college girls in soccer uniforms - in ponytails no less - but, damn, this is a one-girl terror squad.

Sigh: why do I do this to myself and pay attention to election results in a very off-year election, with only a few notable races going on in the country. It was mixed results tonight. The good guys (the Dems) lost in Virgina, which, let's face it, is really still basically a right-wing Southern state.

Very happily, though, the Dems won that NY-23 Congressional seat that the right-wing nut jobs have been salivating over. Glenn Beck and the rest of that crowd have been pushing this race (the seat became open when Jedi Master Obama tapped the Republican incumbent Congressman to be Secretary of the Army causing the special election).

The GOP has literally held that district since the Civil War. Until now. Haha.

Disappointing, though, was the NJ governor's race, where the fat guy won. Buncha yokels down there.
Posted by J at 12:25 AM No comments: