So I'm watching Big Brother After Dark again, and although it is, for the most part, an uncensored look at the BB guests from midnight to 3 am, there was some strange censoring going on. 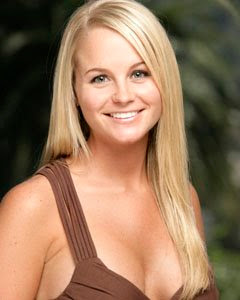 There was even a little booby flash from Jordan, the yummy Southern blond. Thank you especially for that, Showtime. Giggidy.

But Tuesday night, a few players were sitting in the yard (they were joined in mid-conversation as sometimes happens as the cameras cut from room to room) and one of them was saying, "She's really the wife of the president?"

They were clearly talking about Julie Chen, the host of the show, who is the wife of Les Moonves, president of CBS and Showtime. But the guy who was trying to explain this was confused and was actually describing Sumner Redstone, who is the guy who owns CBS and Viacom (which includes MTV, etc.)

Suddenly a Technical Difficulty card came up on the screen for about 30 seconds, first time I've ever seen this, and they quickly cut to some other people in the kitchen prattling on about nothing in particular.

That girl is HOT.