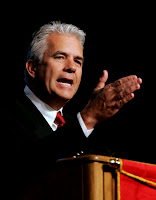 Republican U.S. Senator John Ensign, a social conservative who had been seen as a potential 2012 presidential contender, admitted on Wednesday that he had an extramarital affair with a female aide.

Ok, I'm not a Biblical expert by any means - I know of many, many things, but some areas, like religion, not as well - but, er, doesn't it say something in there about not putting thy rod in thy staff?

But this is certainly yet another case of delicious right-wing hypocrisy.

I'm pretty sure Ensign was at the head of the baying right-wing pack calling for Bill Clinton to be impeached.

Let's just do a quick Google (or Bing)....oh yes, here we go: "Ensign would call on Clinton to resign. "I came to that conclusion recently, and frankly it's because of what he put his whole Cabinet through and what he has put the country through," he was quoted saying at the time. "He has no credibility left," he added."

Do these family-value Republicans ever tire of being exposed as the hypocrites they are?
Posted by J at 2:12 AM

I never even heard of this guy?