The whole Mars-Venus thing in a nutshell 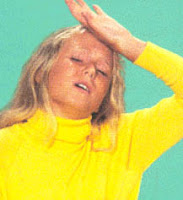 I did happy hour Tuesday with my friend Jan Brady and, over an amusing little apple martini or two, she, once again, shocked me - this time asking what the big deal was about Blu-Ray and why is it even any better than a standard DVD.

But, even worse, proudly proclaimed she would rather watch the standard def version of a channel instead of the hi-def because the HD "is too sharp and hurts my eyes."

Ok, first I will allow every male in the universe to shudder.

And apparently this is a wide-spread problem. I like to read those online boards about HD programming, and it is stunning how many guys will post aggravated messages noting they come home and their gal is watching ch. 4 instead of ch. 704 on the $2,500 big screen HD set.

They just don't seem to care about HD.

And you can forget about the 5.1 Dolby Digital surround sound system being turned on.

My gf does that too but she doesn't do it on purpose, she just goes to the regular channels out of habit. When I point it out to her she's like oh yeah I forgot. And she can never find the HD channels! lol

There's really not that much difference to justify spending that much money on a TV and then EACH MONTH to get HD channels.

Sorry but to think there is not much difference between Hi-Def and regular channels? That's just not true.

I love my HD TV but if it wasn't there I wouldn't go crazy either. It's a nice little luxury to have but you know what, it wont be a luxury soon just like color TV stopped being one.

But if the programs aren't in high def then does having a high def TV set even matter?