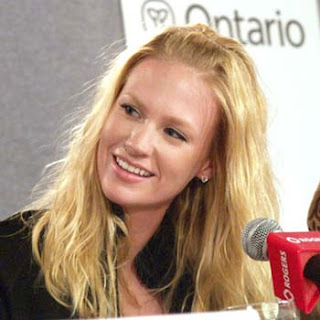 If you are a "Mad Men" fan - as most quality TV viewers should be - there is a fun blog out called Welcome to the Drapers, written as if by Mad Men's Betty Draper in the 1960's. (as played by the luscious January Jones, of course - raawwr.)

I found it when Twitter told me I was being followed by Betty Draper (this is on my work-related Twitter account, where I had written a post about Mad Men.) To be honest, the name actually didn't even ring a bell at first, until I clicked on it and saw what it was, so natch I started following her Tweets. They are also written in character from that era: ("Going into town, having a chicken almond sandwich at B. Altman's."

Then over the next few days, I started getting followed by the other MM characters, Peggy Olson, ("NYC does suit me. Want to move to Manhattan next year when the lease on my Prospect Park apt is up.") Ken Cosgrove ("Ahhh, I wish happy hour could last all month"), Bertram Cooper ("I've been hearing more and more about this "Vincent Price Collection of Fine Art" being offered by Sears & Roebuck. I'm skeptical.")

It's very clever how they do it. And very shrewd; they start you off with Betty, who is one of the more recognizable characters, then gradually add some of the ancillary players, and I'm sure the final add is Don Draper himself.

It's a fun way to keep you interested in the show until the new season begins.

I may have to steal this idea at some point.
Posted by J at 6:27 PM

She looks so different with her hair like that (which I guess is her natural look and not the show?) She looks way more alive.