Did he do that?

Former Phoenix Suns player and NBA star Charles Barkley told police he was in a hurry to receive oral sex from a female passenger when he ran through a stop sign drunk early Wednesday, a police report states. 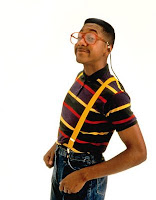 He was partying with Urkel?

That is the most disturbing part of the story.
Posted by J at 3:56 PM