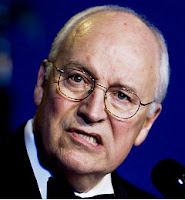 On Fox News Sunday, Dick Cheney was asked to name the highest moment of the Bush-Cheney administration. His answer:

He's asked to name the highest moment, which, by any normal human being's definition, means the best, and the first thing he comes up with is 9/11?

What a sad, sick little man. The sooner this piece of shit returns to Wyoming or Texas or wherever he is going to spend his remaining days on earth shooting animals for fun, and just basically being a total fuckhead, the better for the rest of us.

Unfortunately, he and his "boss" have done so much damage over the last eight years, the rest of us are going to have to spend the rest of our lives trying to recover from their debacle of an administration.
Posted by J at 3:10 AM