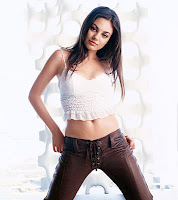 Ironically, Mila Kunis, who does the voice of schlumpy Meg Griffin on "Family Guy," is blazing hot. And it is hilarious to hear her speak in real life - apparently she doesn't change her voice at all when she does the character, unlike the show's creator Seth McFarlane, who voices Peter, Stewie, Brian, Quagmire, and no doubt a few other regular characters. 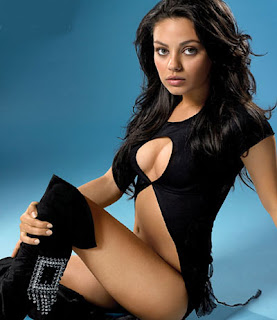 She's probably not too recognized in public - I guess she became semi-famous on "That 70s Show" which, I am proud to say, I never saw one episode in its entirety, but when she's out and about in public, just shopping or at a restaurant, and speaks, everyone who hears her must wonder why they think they know her.

There's a cool series of short clips up on Fancast with the people from Family Guy, taped at a behind-the-scenes seminar they did, and in this clip, she is telling how she got the role on FG. It's not a particularly great story, but it is fun to hear her talk.

You know she's dating Macauley Culkin which is disturbing!

She was in the Sarah Marshall movie, very hot in it.