EL PASO -- A U.S. Army War College report warns an economic crisis in the United States could lead to massive civil unrest and the need to call on the military to restore order.

"Widespread civil violence inside the United States would force the defense establishment to reorient priorities ... to defend basic domestic order and human security," the report said, in case of "unforeseen economic collapse," "pervasive public health emergencies," and "catastrophic natural and human disasters," among other possible crises.

Martial law in the U.S.? Sure, why not, they've already nationalized the banks and the auto industry. 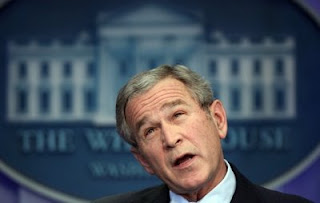 Who knew the change George W. Bush promised when he took power in 2000 was to turn us into a banana republic.
Posted by J at 11:43 AM