The right-wing in this country really is fucked up.

There has been some agitation over a recent video clip of Sarah Palin at a turkey farm in Alaska doing one of those ceremonial pardoning-a-turkey things that politicians love to do. After the ceremony, she gave an impromptu news conference in front of the turkey slaughtering area, and, as she's talking, you can see turkeys being fed into some sort of chopping device behind her, pools of blood gathering at the feet of the guy feeding the birds into this machine.

This isn't Palin's fault, turkeys get killed on turkey farms, although her media/p.r. people were asleep at the wheel in letting her be taped in front of it. But the tough guys at right-wing rag National Review's online blog, The Corner, decided this was a perfect opportunity to mock people who were upset at the video (lots of little kids saw it on newscasts), and decided to turn it all into a red state/blue state thing.

These are actual quotes from the last few days at The Corner.

From a clown named Mark Steyn:

"I didn't think I could like Sarah Palin more than I do, but the nancy boys at MSNBC bleating all over the screen about the Great Turkey Carnage is hilarious. After she's sworn in in 2013, I hope President Palin arranges for a ritual turkey slaughter to be going on behind her at every press conference, if only during David Shuster's questions."

From a post by a fellow named Byron York headlined, "Sarah and the Vegan Weenies" in which he approvingly quotes this email from a rugged reader:

"Because an increasingly large cohort of America in the lower 48 (and probably Hawaii) are p—-ies. They have no clue where their food comes from, they don't hunt, they don't fish, so they get to act all high and mighty about scenes like this. In Alaska, they have critters that consider humans food. Absent high powered rifles, humans are not at the apex of the food chain in Alaska. That will tend to give people a different perspective than the silk pantywaists in the lower 48."

So there you go, folks: nancy boys, pantywaists and p---ies. (That's their editing by the way - I guess actually spelling out the word pussies would tarnish William Buckley's great National Review legacy).

First, put aside the hilarity of Byron fucking York - that's him in the picture there - questioning anyone's manhood, but all of a sudden the great turkey kerfuffle becomes a chance for the he-man club that is NR to call liberals a bunch of faggots. 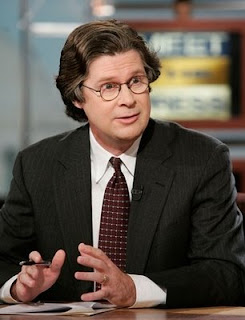 Seriously, what the fuck is wrong with these people?

Listen, I stand second to no-one in my love for animals. But, I admit, sadly, I am a hypocrite: I eat meat. I eat chicken. I eat turkey.

I know they have to be killed so that we can eat them. And when you live in a city or suburban setting, like most of America does, someone else has to do it.

I hope they are killed humanely, but who the hell knows?

The point is, yes, I am a meat-eating, animal-loving hypocrite - but, Christ, who wants to actually watch animals get killed, even if it is done humanely (and I'm not sure that turkey slaughtering was, but let's give the benefit of the doubt and assume it was). That's why people were disturbed at the Palin-turkey video.

But the tough guys at National Review celebrate it and turn it into a cause for merriment and some sort of bizarre political statement.

Yes, it's sure hard to believe the Republican party is now based in a rapidly decreasing little sliver of red states in the former Confederacy.

But it is strange that Byron York doesn't leave the genteel confines of Manhattan or Georgetown, or wherever the fuck he gets his hair styled, and move to East Bumfuck, Alabama, so he can work with his hands and maybe even kill some animals. He should bring Limbaugh and Hannity with him too, but bizarrely, these heartland-loving right-wingers don't seem to want to live there either.
Posted by J at 1:13 PM

When their hero is Sarah Palin who shoots wolves from helicopters what do you expect?