The people ride in a hole in the ground 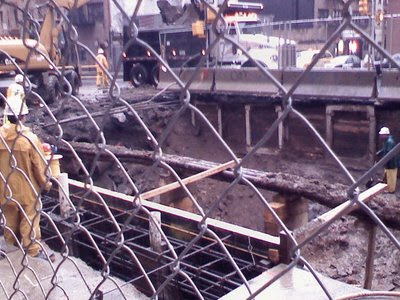 If you've ever wondered what it looks like under the sidewalks of old New York, New York, this can give you an idea, where they are building the new Second Ave subway. Which, by the way, will not only be more convenient to me than having to schlep over to Lexington, but will add value to my apartment. Real estate values increase the closer it is to a subway line, so thank you taxpayers and mass transit riders.

It's actually a little hard to see from the angle I took that pic, but there is an astounding cacophony of cables and wires under there, for Con Ed, Time Warner, Verizon, gas, water. And now, of course, all the extra wiring that will be going in for the subway line and platforms. They actually had to move the Con Ed pipes from one side of the street to the other.


UPDATE: A commenter points to this very interesting blog, The Launch Box, which has much better pix than I took with my cell phone.

And you can find many more pictures of the 2nd Avenue Subway construction site on this Blog link:

But when is it supposed to be finished? Isn't it like 2015 or something? A LONG ways away.

2015 is the target date for Phase I to be finished.

(Phase I connects the Q line to the new 2nd Avenue line, with stops at the new stations located at 72nd, 86thth and 96th streets.)

If it gets people off the Lex then I will be happy, the 6 is so crowded it's unbearable most rush hours.