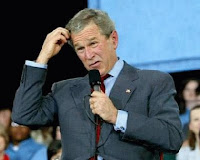 The president and the first lady invited leaders of America's Jewish community for a Hanukkah reception at the White House next month - but raised more than a few eyebrows by putting a picture of a Christmas tree on the invitation.

When reached for comment, Laura Bush's spokeswoman, Sally McDonough, said the White House usually prints separate cards, but in the waning days of the presidency, there had been an oversight.

"Mrs. Bush is apologetic," she said. "It is something that just slipped through the cracks."
- NYP

Slipped through the cracks? Sure, sort of like the U.S. economy, the City of New Orleans, the war in Afghanistan, the environment...

How many days left until that stumblebum is out of there? I really need to find a Bush count-down clock for Too Saucy.
Posted by J at 1:26 AM