Hakuna Matata and pass the meth

As I nerdily surfed over to the Anchorage Daily News web site to see if they had an updated count on the senate election battle between (typically corrupt Republican) Ted Stevens and his Democratic challenger, there was BIG news on the home page. 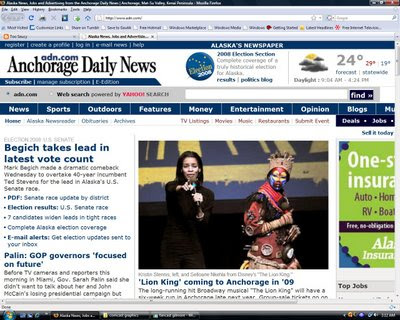 Not the election returns - The Lion King road show is coming to town. Yee haw.

Oy. That show sucked when I saw it 5 or 6 years ago. And they are just getting its suckiness next year. And it is front page news!

It's no wonder Sarah Palin-land is the crystal meth/date rape/hillbilly capital of the western world. 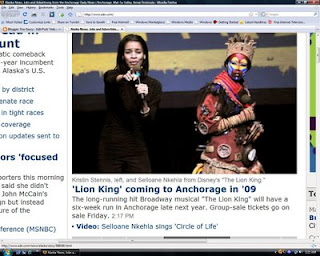 By the way, not making fun of the ADN, it's actually a decent newspaper and did some great reporting on VP Annie Oakley during the campaign, while the national media was in its initial swoon over her. It also endorsed Obama for president, knowing Palin as well as they do.

But it is sort of fun to see a story about a crappy Broadway show playing for 6 weeks in town and being front page material.
Posted by J at 2:04 AM

The costumes and dancing are amazing in Lion King, most of the songs I wasn't in love with either.