Once again, Obama triumphs while Sen. McGrumpypants and the haters of the GOP are left sputtering ineffectually on the sidelines whining.

Have you ever seen such a bunch of whiners? Wahh Obama has too much money, wahh the media is unfair, wahh Bush is dragging us down, wahh the liberals are sexist against VP Annie Oakley. 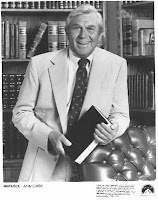 If McCain had done a half hour commercial, it would have got beaten in the ratings by a 12-year-old rerun of Matlock. Especially since Matlock himself (the beloved Andy Griffith) has endorsed Obama.
Posted by J at 12:37 PM