Duberstein said he was influenced by another prominent Reagan official - Colin Powell - in his decision.

"Well let's put it this way - I think Colin Powell's decision is in fact the good housekeeping seal of approval on Barack Obama." 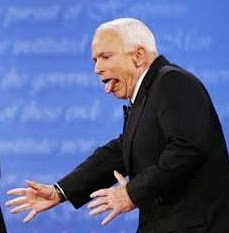 But don't forget, Sen. McCrankypants has Joe the Plumber, so, you know, it evens out.
Posted by J at 3:08 PM

In a lot of ways, I feel so sorry for McCain in regards to this picture. I am sure he has seen it in dozens more places than I have, too.

You're too much of a softy, pilgrimchick. I would normally feel sorry for the old coot too, but he's run such a sleazy campaign, I have no sympathy left for him now.