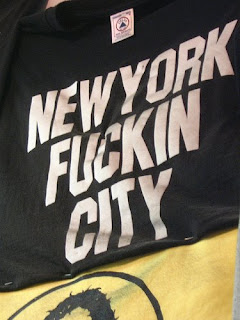 Ms. Palin arrived in New York after a campaign event with Mr. McCain in Pennsylvania.

She exited her Secret Service vehicle in front of the hotel to an empty block: Police and Secret Service had closed down the street and kept every would-be pedestrian indoors about 20 minutes before her arrival.

After she stepped out, Todd was right behind, and the Secret Service followed them directly into the hotel.

New York is considered a Democratic city, but it is also an impatient one, and residents’ views of visiting politicians often have less to do with their positions on domestic and world affairs than with how much the trip inconveniences them.

So when police, for security reasons, refused to allow people to leave a nearby restaurant shortly before Ms. Palin’s arrival, many were not at all happy about it. Instead of the cheering throngs of supporters waving lipsticks and adoring signs that Ms. Palin has become accustomed to on the campaign trail, she was met by the equivalent of a Bronx cheer.
- New York Times

Welcome to New York. Now get the fuck out. Hillbilly.
Posted by J at 11:04 AM

But her ratings are dropping now all over the country not just in NY as everyone is starting to pay a little more attention and are starting to figure she could be vice president.