On Bristol Palin and her Juno-like shenanigans….

Just to be clear, I feel nothing but sympathy for Bristol Palin. Sure, it’s sort of amusing to chuckle at her unusual name, not to mention the wacky names of her 327 siblings - but she didn’t choose any of that, and she sure as hell didn’t choose to suddenly be in the national spotlight.

She’s a 17-year-old high school girl, she screwed up, but, you know, there are plenty of teenage girls who accidentally get pregnant.

Sadly for her, though, she has the added burden of having that weirdo as her mother. Sarah Palin shoots animals for giggles (see pic at left). She rants against abortion, bragging she would ban it even if the pregnant woman is a victim of rape or incest. And, worse of all, she willingly dragged her unmarried pregnant teenage daughter onto the national scene with all the press attention she knew would result with a run for the White House.

Hell, just looking at the kid’s face at the big announcement rally last week is heartbreaking: she was made to stand there holding her baby brother. Are you telling me they couldn’t have left that infant somewhere off stage being cared for instead of parading it onto that platform in front of a room full of baying Republican partisans, who - let’s face it - are not the sanest group of people in the world.

What was that discussion like? “Bristol, you’re going to come out and hold the goddamn baby for the 45 minutes of speechifying. Now, Goddammit, smile.”

And you have to love the statement put out Monday when Bristol’s condition was announced to the world: “Bristol Palin made the decision on her own to keep the baby, McCain aides said.”

Of course, the real issue is that would-be VP Palin and her President will not allow YOU to make that same decision.

But that’s the age-old Republican philosophy, isn’t it: do what we preach not what we practice.

It’s seen by their continuing love of Bill O‘Reilly, even with his sexual harassments of a young female producer, or Rush Limbaugh and his drug addictions, or Bill Bennett and his gambling sickness, or…well, the list goes on.

If any of these actions had been carried out by a Democrat the right would be howling for their head and immediate firing, if not jail.

But when it’s the right-wing nut jobs - ehhh, no big deal. Forgiveness, that’s the Christian thing to do!

You know, just like they forgave Bill Clinton for getting a bob job.

Can you imagine, by the way, if Chelsea Clinton had gotten pregnant when she was an underage, unmarried teenager? Can you imagine the screeches that would have emanated from the right about those liberal permissive parents of hers.

Or how about if she had been frequently photographed falling down drunk after boozing (underage illegally) in bars like the Bush twins? 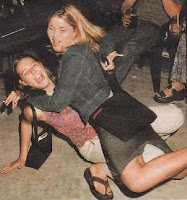 But no, Bristol is a good Republican. (I wouldn’t be surprised if she is dragged out to give an interview to a sympathetic Fox News “reporter“ before this is all over).

And with the right, their view boils down to this: it’s ok for the favored elites, just not for you out there in peasant land.

Especially on the choice issue.

Then it becomes: we will tell you what to do, gals.

God forbid you have an unplanned pregnancy, because we will make sure the courts control your body.

That's some political party they got there...

I have to agree. The daughter is just a kid who doesn't deserve to be thrown to the wolves - her mother is the one who chose to make her family situation a national event.

There's no way that girl and that boy want to get married. That shotgun is being used for more than just killing a moose.