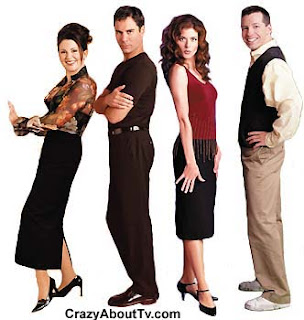 Has anyone ever seen Vice President Karen Walker hold that baby? I saw him getting passed around the airport tarmac and the GOP convention hall like a joint at Matthew McConaughey's house. I've never seen Palin actually hold him.

The right-wingers are frothing at the mouth in full-frontal anti-choice glory, saying how admirable it was she gave birth to him, but since the 17-year-old seems to be the one who holds him and cares for him most of the time, I'm not sure why the kudos are being directed at Annie Oakley. 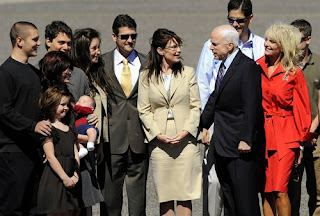 And speaking of Bristol, here's what CONSERVATIVE Lawrence Auster says about the sudden acceptance of teen pregnancy among his Republican cohorts:

If you look very carefully at the convention and the airport pix, by the way, you can see the prop, er, I mean, baby, but nowhere near the GOP's mom of the year.

Her convention speech won plaudits from all the usual suspects. Um, ok, no one ever said she couldn't read a teleprompter. She was a goddamn sportscaster once. They could have nominated Warner Wolf and got the same result.

Oh they will have plenty of photos of her holding the baby over the next few months - before it is then quickly handed off to the daughter.

You know there is a rumor it is not her baby but the daughters.