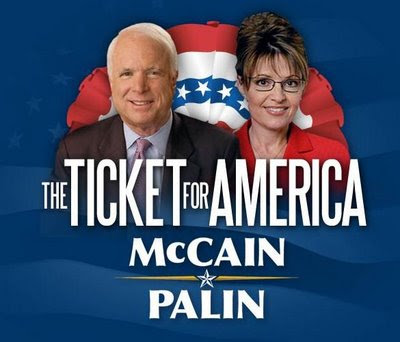 I hate to interrupt my relaxing Labor Day weekend to jump on the computer, but this Sarah Palin choice as veep by McCain is seriously astounding.

That's an actual McCain campaign picture, by the way, not something doctored up.

Oh yeah, you want her a heartbeat away from being the most powerful person on Earth, with a 72-year-old cancer patient in the Oval Office, no less.

It seriously looks like an ad for a wacky Judd Apatow movie - "Dad and Grad" with Brian Dennehy as John McCain and Tina Fey as Sarah Palin.

And just to be clear on the candidate who the GOP thinks American women are so stupid that they will desert the ideals the overwhelming majority believe in to vote for McCain-Palin because, you know, she has a vagina: Palin, a Christian fundamentalist, believes in banning ALL abortions. Even a pregnancy caused by rape and incest. Christ, even John Fucking McCain would allow those exceptions.

But in Sarah's world, gals, if you're a 14-year-old raped by a drunken uncle one night, you must suffer through a nine-month pregnancy and give birth to that fetus. Caused by your drunken uncle's rape. Wonderful.

That's the Republican party today.
Posted by J at 4:14 PM

Well we know the teen pregnant daughter won't be getting an abortion. Nothing like getting knocked up at 17 - I'm sure it won't ruin any plans she had for college or a career.