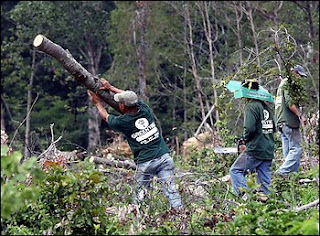 More than 140 acres of rare oak trees on the Civil War site were getting in the way of historic vistas of the last Union assault at the second battle of Manassas. So the National Park Service cut them down.

Preserving Prince William's physical battlegrounds is no longer enough. Historians want to re-create historic battlefields so visitors can see the land the same way that those who fought in the Civil War would have seen it.
- Washington Post

Wonderful. Thousands of rare and beautiful trees, probably home to a lot of wildlife and bird's nests, are cut down so a bunch of drunken hillbillies can play dress-up soldier on the weekend and no doubt fantasize about the South winning the Civil War.
Posted by J at 3:14 PM

Now why do they have to be drunken southern hillbillys?? lol