What a sad commentary on John McCain, the Republican party, and, frankly, many Americans, that Obama has to "defend" traveling to vital countries in Europe and the Middle East and meeting with their leaders - as if there's something suspicious about that.

How did it become "cool" to disparage having friendly relations with foreign nations, and, in fact, to mock them, especially (for some bizarre reason) the French? The French who enjoy one of the best qualities of life in the world, with their six-week paid vacations, whose health care system delivers a healthier, longer-living population at a fraction of our cost, and whose food and wine...well, do we even have to discuss that? Or is W. too busy eating BBQ slop on his fake Texas ranch?

Bush Senior was actually quite the internationalist and did a great job putting together a truly international coalition to expel Sadaam from Kuwait. Bush Junior, of course, stumbles from one foreign policy debacle to another and seems to think real 'Murcans don't need allies.

There is probably a whole bunch of Americans, especially those under the age of 8, who have never seen a large crowd gathered in another land and WAVING American flags, as 200,000 did in Germany, and not burning them. 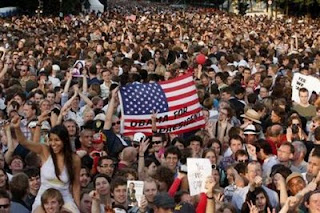 But to listen to McCain and the right-wing freaks on hate radio, apparently this is a bad thing.