Imagine how many Jack & Cokes that would buy 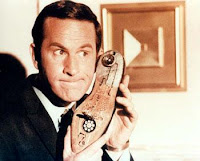 Here's who I talked to yesterday on my land line phone: people at the toll-free numbers at Best Buy, The Gap, Continental Airlines, The Venetian Hotel, and a large cable company.

And that is the most I have used that phone in about 3 months. (The Continental and Venetian calls were only because their web sites were too slow for my liking. The Best Buy and Gap calls were to bitch about something and I needed a live person not a web site).

So why am I paying Time Warner $33 a month for a land line? I don't think more than four people in the world even know the number or would think to call it. If it was a reliable stand-by in an emergency, it would be one thing, but with the VOIP aspect, if there is a power failure, it won't work anyway, unlike the old phone company lines which just kept on working no matter what. But that was $65 a month the last time I had one.

I've got my fax machine hooked up to it, but really, who uses faxes anymore?

That's the center speaker of a nice home theater system.

Unless FIOS pitches me a decent price for their triple-play package, and also uses the reliable Verizon phone network, it may just be time to say so long to the ol' 212 number.
Posted by J at 12:01 PM

What is VOIP and why wouldn't they work in a power failure? I thought home phones worked even w/o electricity??

severin, when you get your phone service through your cable co. don't forget it's coming through your modem. So if the power goes out, the modem goes out, so you lose phone too. The original Bell System phone lines don't run on house current so they keep working no matter work. And another aspect to remember though, even if you still have the phone co. for your service, most phones today are electrically operated, with answering machines, wireless, etc. you have to plug them in to an electric outlet work. So even if you have the phone co. you will continue to get the dial tone BUT your phone will be out anyway. You need one of those old phones that just plug into the phone jack, no electric needed at all.

How many phone lines does anyone need? Why would you have a cell and a home phone anyway??