Here I am, and in this city, with a fistful of dollars/And baby, you better believe….

And, of course, my losing streak continued.

It's just that I have NEVER seen a good movie on a plane.

On my way to the Golden West, the movie was “Drillbit Taylor“ - this, I believe, was probably what prompted Owen Wilson to try to commit suicide.

East bound, it was something called “Penelope” - and I have honestly never even heard of this one.

Do the airlines go out of their way to get the worst films possible to show to a captive audience? And sadly, there were people actually laughing at Drillbit. Laughing out loud, no less. Ugh.

Well, I go first class, natch, and, even with the free headphones, I couldn’t watch either of these atrocities, so I busied myself with a Nelson DeMille and copious amounts of mimosas, Jack’s and Bailey’s. Ahh, relaxing. Except for the annoying laughter around me.

A few thoughts about LV. There really is a class system there.

There are those weird C-level casinos where the employees and the customers seriously look sickly and just not quite right. There’s one called Bill's, another called O’Shea’s. What is the deal with them? How in hell do they survive?

I don’t know if it’s the harsh fluorescent lighting, the sickly décor or the general down-on-their-luck ambiance, but everyone in them just looks bad. It’s fascinating to see. 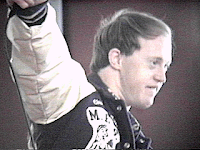 Then there are are the B-levels, like Bally’s (where my friend Corky goes, for some reason) or the Flamingo, and these are very slightly a cut above the C-levels.


But then there are the A-list properties, like the Venetian, my haunt.

Although it does make you feel like you are in India and trying not to be touched by a cow when you leave the property.

Well which city is worse that is probably a tough call.

Dude where do you live? I think its prob some town that if you asked most normal people where would you live Vegas, NY or YOUR little town I think we know what they would say.