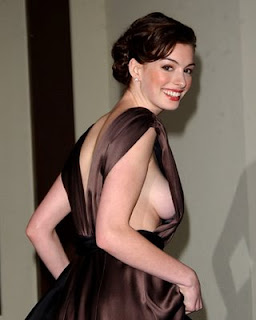 NEW YORK - An Italian businessman famed as the long-time boyfriend of actress Anne Hathaway was arrested on Tuesday on charges of operating a fraudulent real estate scheme that he claimed was linked to the Vatican, U.S. authorities said. Raffaello Follieri, 29, a globe-trotting multimillionaire living in New York, was charged with conspiracy, wire fraud and money laundering in a criminal complaint unsealed on Tuesday in U.S. District Court in Manhattan.
- Reuters

I'm not sure what exactly he did wrong, but I'm happy to see this sleazy guy, who was defiling that princess for far too long, finally get his comeuppance.
Posted by J at 2:03 AM

whoa - I never knew she had such a uh healthy upper torso going on :)

You know she already dumped him. He was treating her bad and no one could even figure why she stayed with him.

Velma, she's really cute and he's really skeezy. I don't know what was going on and why she was with him?