You lie down with dogs...

...you get up with fleas. And it's good to see John McCain and Republicans in general being hoisted on their own petard with the lunatic right-wing Christian evangelicals they always court.

After the GOP tried to gin up a phony controversy over Barack Obama's pastor, Jerimiah Wright, McCain has now been forced to disavow the endorsements he received from two wacked-out ministers.

A tape surfaced of one of them, Rev. John Hagee, saying that somehow Hitler was God's instrument to move the Jews back to Palestein.

Many of these right-wing nutjobs profess great support for Israel, both in words and even by giving money (Hagee has given $30 million over the years to Israeli causes), but they actually do it not for an affection toward Jews but because they believe in a fundamentalist Biblical theory The Times delicately describes as, "premillennial dispensationalism, a literalistic approach to biblical prophecy that places a special emphasis on the role of the nation of Israel in the end of history."

The Middle East may very well end up being the cause of the end of the world one day with all the religious strife over there, but it ain't going to be because of God. 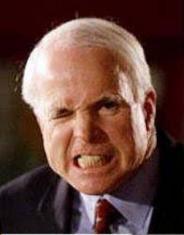 The GOP has tried to mix religion and politics for years, and Jerry Falwell, now roasting slowly in Hell, was just one of the more famous examples. Pat Robertson is another creep everyone knows. Guys like Hagee are less well-known but just as odious, so it's good to see his poison bite McCain in the ass.
Posted by J at 11:49 AM

Even if he doesnt have the preacher anymore all the super religious people will still vote for McCain!