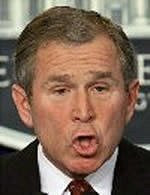 Poll: More disapprove of Bush than any other president

A CNN/Opinion Research Corp. survey indicates that 71 percent of the American public disapprove of how Bush is handling his job as president.

I mean, ok, we're mired in an endless bloody debacle of a war in the Middle East, our standing in the world as a beacon of liberty and justice has plummeted, the booming economy he inherited is inexorably sliding toward recession, homes are being foreclosed, gas is approaching $4 a gallon...and, oh, why not throw in the loss of one of the nation's great cities, as New Orleans was allowed to drown.

But, you know, other than those things, is he that bad?

Are the pictures you use of Bush doctored??

Seriously who are the people who still give him a favorable rating??