Ryan Seacrest might be adding hosting duties of another kind to his schedule in 2009. A source from within CNN says that Seacrest, who has filled in for his friend Larry King in the past, is involved in "serious negotiations" to take over “Larry King Live” around year’s end. King told The New York Times in April 2007 that Seacrest would be his first choice to take over the show when the time came.

“He’s the classic generalist,” King told the Times. “The only thing I don’t know, and I’ve gotten to know him pretty well, is how versed he is in politics, world affairs. Does he read the paper? Is he interested in Iraq? Because if he is, he’s going to be very good.”
- MSNBC

Yup, because that's the guy who should be discussing politics and the Iraq war on national TV. 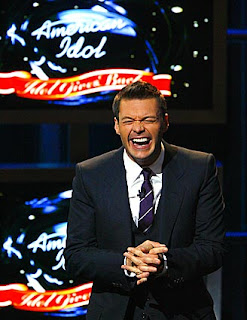 I'm going to be sick if thats true.

And maybe Paula can do the CBS news now! :)

How did this guy get to be so big? He's on like a million shows now!