It would have had more fantasy scenes than "Harry Potter" 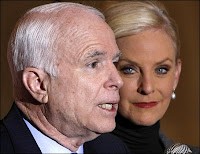 Oops, it looks like someone at the McCain camp decided this might not be such a good idea:

"Cindy McCain, wife of Senator John McCain, the presumptive Republican nominee, has decided not to write her memoir after signing a book deal with Viking last month.

"When Viking announced the deal, it said Mrs. McCain would “write about her views and feelings concerning family and years of service; her meeting, courtship and marriage to John McCain...”

Now those would have been some good chapters. She was a multi-millionaire beer distributor's daughter, 20 or so years younger than McCain, who, wouldn't you know, happened to be already married to his first, older wife.

He dumped the first wife, the one who stood by him during his Vietnam days, and goes for the rich young trophy model.

(Ok, well at least we know he is genuinely a Republican).

If Cindy had went ahead with her book, maybe she also could have even touched on some current topics, like how he uses her private plane to jet around the country to skirt campaign laws. Or how they don't release her no-doubt voluminous tax returns each year, even though the other presidential candidates were badgered to release their spouse's tax forms.

I get the feeling there's a wealth of stories - so to speak - just waiting to be revealed with Cindy McCain.
Posted by J at 10:50 AM

I didn't even realize he had been married before.

Wasn't there a big story that he cursed at her in public? But I guess he still likes her money...