The two biggest U.S. warehouse retail chains are limiting how much rice customers can buy because of what Sam's Club, a division of Wal-Mart Stores, called yesterday "recent supply and demand trends."

Sam's Club followed moves by Costco Wholesale, based in Seattle, which in some stores limited bulk rice purchases.
- Washington Post 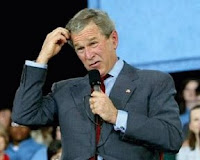 Seven years ago George W. Bush inherited from Bill Clinton the strongest economy this country had ever seen, stock market soaring, inflation and unemployment way down, and every segment of society - including minorities and the very poor who usually get left behind - finally starting to make gains in their income.

Since Boy George took over, we've lost an American city, we're mired in an endless unnecessary debacle of a war, gas is approaching four bucks a gallon - and they are rationing rice at Sam's Club.

Its a good thing we use credit cards or we would be using wheelbarrows to take the money to the stores.