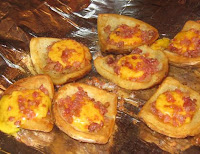 With the recent Elliot Spitzer mess, New York had a bit of sexytime shame recently - but leave it to New Jersey to outsleaze us with even better gubernatorial shenanigans.

The previous gov. of course, was "gay American" Jim McGreevey, and now it turns out that he and his wife engaged in threesomes with an aide before he came out.

But the best part is they would start their "date nights" at TGI Fridays.

I guess the Houlihan's was busy.

Spitzer was going to the swanky upscale Mayflower Hotel in DC for his playtime. And in the Garden State, McGreevey was at the home of the Jack Daniels-flavored chicken wings.

Hello. This post is likeable, and your blog is very interesting, congratulations :-). I will add in my blogroll =). If possible gives a last there on my blog, it is about the Celular, I hope you enjoy. The address is http://telefone-celular-brasil.blogspot.com. A hug.