One more reason to hate that fat right-winger Drew Carey 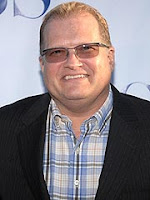 Animals and TV shows - two of my favorite topics, melded together in this interesting list that just went up on Fancast.

They asked Beverly Kaskey, Senior Director of the Hollywood branch of the Humane Society of the United States, to name the five best and five worst TV shows (episode or series) for portraying and using animals.

I'll just list the five worst, so you know which ones to boycott. You can find the entire list, including the good guys, here.


Survivor: Killing animals or reveling in doing unspeakable things to dead animals became an unfortunate hallmark of certain Reality TV shows. In one infamous episode – and there were many - contestants were required to behead a rooster and stab to death a squealing pig. The frenzy ended with one contestant smearing blood on his face.

Fear Factor: Also became a repeat Reality TV offender with its gross-out challenges, involving the general debasement of animals and their body parts, and the frequent, sadistic killing of live insects.

Flipper: This was a series that did much to endear dolphins to mass audiences, revealing their remarkable intelligence and extraordinary personalities. But, sadly, it popularized dolphins in negative way, creating an increase in wild dolphin captures to meet the demands of marine parks and swim-with-programs.

Friends: "The One With The Ball" - In this classic example of irresponsible pet ownership, Rachel purchases a hairless "sphinx" cat, then tires of the ridicule, and instead of finding a good home for her unwanted pet, she takes to the streets trying to sell the cat to anyone who'll take him. This episode rounded out its disregard for animals with another character shooting a noisy bird because his early morning chirping annoys him!

The Drew Carey Show: In a 2001 episode, Drew's animal activist girlfriend is maliciously ridiculed for her concern for animals, sending an implicit message that animal-welfare is a joke and that animals just don't matter.
Posted by J at 4:00 PM

Friends? How did they come up with that one?

Are they sure they want to say Ellen is a good person for animals after her meltdown this year with the dog adoption?