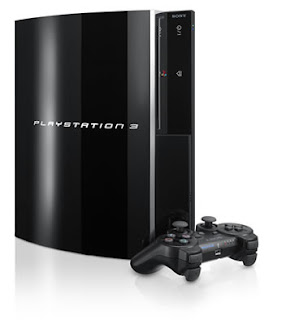 Let me just gleefully note and gloat that a Sony Playstation 3 is winging its way to Chez JBK even as I type - and, even better, I got it for FREE! by cashing in some Amex Gold Card rewards points.

In addition to getting it for the best price known to man, I will also enjoy seeing not only video games but the envy on the face of a previously mentioned bud who can not stand the thought of me being able to order this thing. He's apparently not allowed to get one.

A Hi Def copy of the "Spiderman 3" movie on Blu-Ray comes with it to play on the built-in Blu Ray DVD player in the system. That's really not a film I would have chosen, but, oh well, did I mention it's free.

Speaking of movies, I was flipping around the channels last night and came across "Galaxy Quest." I'm not a Tim Allen fan, and I've seen this damn thing three times now - but I still have to watch it when I see it on cable, even though I have it on DVD and can watch it anytime I want. What's up with that?

Of course, now I will have to get a Blu-Ray edition - to watch on my free Sony Playstation 3.

By Grabthars Hammer Galaxy Quest is a great movie!! :)

Get Tom Clancy's Vegas it's amazing

Once again - boys and their toys:)