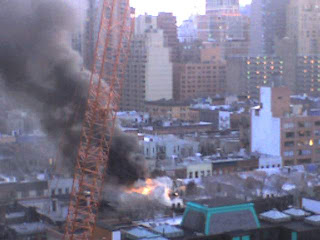 I suddenly heard a lot of fire truck sirens this afternoon so I looked out my window and saw a walk-up apartment building a few blocks away absolutely ablaze. Tons of fire companies there and that nasty black smoke pouring off the roof.

Sadly enough, my first thought was, "Oh, there are probably some poor dogs and cats in there right now, terrified, probably home alone, their masters at work. They are going to get killed."

Then, of course, I quickly went to: "That's horrible. I hope no-one was killed. At the very least, some folk are going to come home from work tonight and find their home destroyed."

My rationale is that the firemen were there taking care of the humans, while they tend to make pets the last of their thoughts.

And yes, I know, I know: of course they should make humans the priority...but still.

A few years ago, I was walking down a street and saw a blaze in a walk-up, and a firemen was on the fire escape on the 5th floor and sort of scooped up a dog from the window, basically threw him on an air conditioning unit poking out from the wall, and the poor thing sort of teetered there for a few seconds and then fell five floors. I couldn't look to see if it survived.

At least he tried to help the dog. But I'm sure he could have put the dog on the fire escape stairs just as easily. Sigh.

But I always love when you read those stories about some fireman or EMT who saves a pet by giving it mouth-mouth.

Intellectually, I know I should worry about humans more than animals - I have issues.
Posted by J at 7:22 PM

yes totally wrong - but I know what you're saying! :)