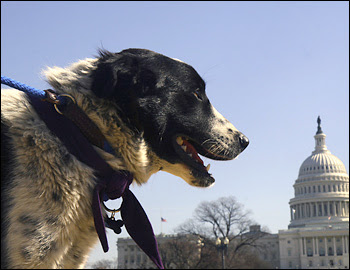 Parts of Charlie's back story were obscured to protect those he left behind. In his case, they were U.S. soldiers based at a Baghdad outpost -- the SPCA identified the unit only as Charlie Company -- who were barred by military rules from keeping pets. But when the soldiers came upon a flea-infested and starving puppy while on patrol, they could not resist sharing their affection and their ready-to-eat meals.

One soldier, identified by the organization as "Sgt. Watson," sent e-mails to animal rescue groups. The SPCA took up the case, and Operation Baghdad Pups was born.
"Making a home for Charlie away from Baghdad's slums"

The people are living a hellish existence over there. I can't even imagine what the poor animals are going through.
Posted by J at 2:36 PM

Nice story but how many unwanted dogs are there already in this country??

EVERY animal deserves a loving home. Not just the ones in the US. I don't think this program is looking to solve the overpopulation in foreign countries. Just to help the animals that have given comfort to the troops and return the love they gave. Plus once the dogs learn to depend on the trooops for existence leaving them behind means certain death for they wouldn't have the skills to survive without humans to depend on.

So sad but so nice what those soldiers did.