Hypocrisy in the GOP? What a surprise!

It's funny, but when Bill Clinton was getting pilloried for his fling with Monica Lewinsky, the Republicans and the right-wing media were up in arms. Those bobjobs from Monica were, according to them, the most disgraceful and shocking thing they had ever heard.

But now that The Times is reporting that GOP nominee apparent John McCain was involved in an extra-marital affair with a lobbyist - ehh, it's not such a big deal. The report is gutter politics and sleazy journalism, they cry.

Here is the real difference though: somehow I doubt 22-year-old intern Monica was trying to influence any official decisions.

With Sen. McCain, though, we have a highly paid lobbyist - paid big bucks by her clients to influence the government - and it's not so casual. (By the way, have you noticed these Republican women all look the same - sporting the cheap-looking, bad blonde dye job. At least with Monica, Bill was going for an earthy, big-breasted Jewish girl.) 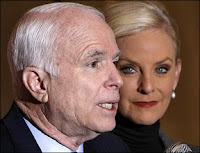 And like all good Republicans, of course, McCain had already cheated on his first wife, dumped her and, a month later, married the current Mrs. McCain, a then 24-year-old beer fortune heiress no less. But, as Rudy Giuliani will attest, just because you're on the second wife, it's hard to stop your cheating ways. Newt Gingrich will attest to that too.

The hypocrisy from these people never fails to amaze.
Posted by J at 11:23 AM

I didn't even know there was a first wife he ahd cheated on. What a pig.

He's denying it but they always do.