Just when you thought the race for the Republican nomination couldn't get any crasser, with the candidates fighting over who hates immigrants or gays more, or who wants to keep our troops in Iraq longer, a dust-up erupted over that old GOP bugaboo - who is tougher on crime.

And of course, given the nature of these empty suits, the debate turned into who has executed more people. Mike Huckabee, who plays a God-fearing Christian on TV, apparently believes God approves of the death penalty and bragged that he executed plenty of people when he was governor of Arkansas, while, he sneers, Mitt Romney never executed anyone when he was governor of Massachusetts.

Of course, the fact that Massachusetts doesn't actually have a death penalty is just a small quibble.

It is fascinating, though, that at a time when states are re-evaluating the effectiveness of capital punishment, and New Jersey recently became the first to abolish it, the GOP candidates still brag about how many people they killed. 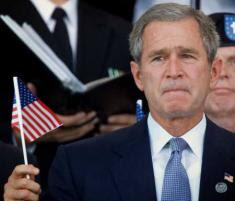 I suppose it shouldn't really be that surprising with this party. After all, Texas, home state of the current genius in the Oval Office, accounts for an astounding 60 percent of the executions carried out nationwide. Whee doggy.
Posted by J at 12:24 PM

The only one I could perhaps stand is McCain.

If Romney is the candidate there is NO way they win.

I think it's going to be McCain who will then lose! :)