Another reason to go to The Venetian 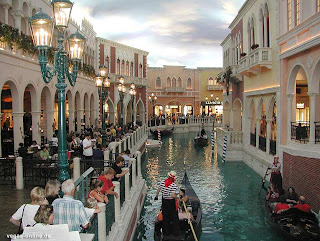 You've got a better chance of surviving a heart attack!!

Doctors already knew that more than half of those who suffer such attacks in airports and casinos survive. But a new study shows that only a third of victims in hospitals survive -- primarily because patients do not receive life-saving defibrillation within the recommended two minutes.

Nearly 40% of hospital patients who received defibrillation within two minutes survived, compared with 22% of those for whom the response took longer, researchers reported in the New England Journal of Medicine.

As many as 750,000 people suffer such attacks in hospitals every year in the United States, and a quarter of a million suffer them outside hospitals.

"It is probably fair to say that most patients assume -- unfortunately, incorrectly -- that a hospital would be the best place to survive a cardiac arrest," USC cardiologist Leslie Saxon wrote in an editorial accompanying the report.

People who suffer cardiac arrest in the middle of an airport or casino -- where defibrillators are widely available -- are typically noticed immediately, whereas a lone patient suffering an attack in a hospital room may not be noticed for much of the crucial window of opportunity during which defibrillation is most effective.

The odds of survival are even lower in hospitals with fewer than 250 beds, and on nights and weekends, according to the study by Dr. Paul S. Chan of Saint Luke's Mid-America Heart Institute in Kansas City, Mo., and Dr. Brahmajee K. Nallamothu of the University of Michigan.

Well....that makes sense. I work on a cardiopulmonary-telemmetry unit, and all of our patients are constantly hooked up to heart monitors that we can see on screens on our station. We know the second something goes wrong and can start CPR within seconds. But if someone is in ortho with a broken leg and has no reason to have their heart being monitored, and they start having a heart attack, there is no way to know that unless there is an RN in their room 24/7, which is impossible.

So it only makes sense that you'll get faster help if you're in the middle of a room where there are hundreds or thousands of people and you collapse, as opposed to sleeping in a room when there's no need to be on a heart monitor.

But hey, if you need another excuse to go on vacation, by all means, use it. :)

I guess the numbers are true but it really makes no sense. How can it be like that with all the trained people who are around in a hospital??

Not a Hipster, I understand why the numbers are the way they are, and what you say makes sense, but you have to admit, it just seems funny (weird funny not haha funny) that you would have worse odds of surviving in a hospital than next to a blackjack table! And yes, I don't need much excuse to go to Vegas whenever possible. :)

Wouldn't the people in a hospital already be sicker than the normal population since they were in the hospital in the first place - so they would be more likely to die.

l.w.t., it's because not everyone in a hospital is on a constant heart monitor unless they're there for heart realated reasons. So if an otherwise healthy 45 year old man came in because he broke his leg and stays overnight, they woud have no reason to need to monitor his heart, and an RN is not in a patient's room 24/7 unless that person is put on a psych hold.

And it may be easy to say that those people can just hit their call lights and call for help, but sometimes people don't know the signs of a heart attack and so they just sit there and suffer instead of calling for help. It's just not possible or practical to have every patient in the hospital on a heart monitor. We actually have defibrillators in the hallways, so our patients may have a better chance of surviving if they're walking down the hall. :)

Yeah, it's weird but true, you're more likely to survive being out in public where people will notice you as opposed to being alone in a room.

I'd still rather take my chances in a hospital than a hotel or a casino!!

I guess at least you would go out with a smile on your face! :)