Some tips for you. 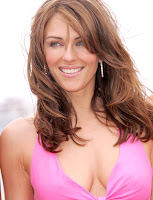 1. Do not, repeat, do not allow yourself to be finagled into watching a disaster called "Music & Lyrics" as I was Saturday night. It's two hours of your life you will never get back. Incredibly insipid, a ridiculous plot, and not even musically fun even though it's about songwriting. Just awful.

Drew Barrymore is in it, and she is usually quite adorable, but it's just a horrible film. Especially since Hugh Grant is the costar. You know, the guy who cheated on Elizabeth Hurley! With a street hooker! And he's trying even harder than usual to be cute and charming in this clunker. Ugh

2. Kinsale, the Irish pub on Third, does a sandwich called the Wonder Sandwich, roasted turkey, black ham and cheese on a baguette - delish. It's only on the regular lunch menu, though, which begins at 12 noon, but I was able to charm the waitress with my flirtatious magic and she convinced the kitchen to prepare it for me at 10:30. I was having brunch with my husky right-wing friend who had dutifully accompanied his wife to the big city to get her hair done. (I think he held her pocketbook while she was in the salon). He wasn't able to charm the waitress and was stuck with baked beans, chicken fingers and French fries - very healthy, I'm sure.

3. A great new drink I've discovered you should try - brandy and ginger ale. Quite tasty. It helped make the movie somewhat bearable.
Posted by J at 1:03 PM

my wife got that movie and I have avoided like the Hillary and questions in Iowa. As for the brandy, I'll try it tonight as I check out. I hope to dabble in some Johnny Walker Gold that ended up behind the bar.
have a happy New Year

It was sort of cute but I agree could have been much better.

Ahh Kinsale, I've been there!

Marcus, there's also a Johnny Walker Blue label, but it's pretty pricey. It's usually around $200 for a bottle.

I haven't seen that movie yet but it's playing on HBO this month so I will watch it anyway since I've basically already paid for it! :)

I've seen the blue and budget avoids a purchase. But is was the first time with the gold and it was smooth. Chased with a contraband cohiba, it was a good start of the new year.

Bleh how can anyone drink scotch??? lol

Agree on that movie, a waste of time and money!