Mike Huckabee, the former Republican governor of Arkansas is surging in the GOP polls lately, catching up to Mitt Romney in Iowa, leading Rudy in the South.

But it turns out his family, which he likes to parade around as an example of how Godly and religious he is - as opposed to, you know, thrice-married, cross-dressing Rudy, or Romney the Mormon, a religion the Southern evangelicals hate and fear - has a sadistic cocksucker in it, and maybe he should think twice about using them as examples of his character.

One of his sons was involved in a very disturbing incident a few years ago, as reported in an animal cruelty bulletin put out by Kinky Freidman of all people:

(Miller County, Arkansas) Two boy scout counselors, 17 year old Clayton Frady and 18 year old David Huckabee, the son of Arkansas Governor Mike Huckabee, have admitted to catching a stray dog during their summer session at Camp Pioneer in Hatfield, AR, and hanging the dog by his neck, slitting his throat and stoning him to death.

Camp officials, who did not report the crime to law enforcement officials, have admitted that the act did occur and have fired the boys from their positions. However, no charges have been filed against the young men.

Arkansas State Police conducted a perfunctory investigation, but did not attempt to locate witnesses to the crime.

That's the asshole in the center here in an old Christmas card the Huckabees sent out. The fat fuck. (And by the way, I guess this puts to rest the old fashion myth that stripes are slimming. What a bunch of double wides!) 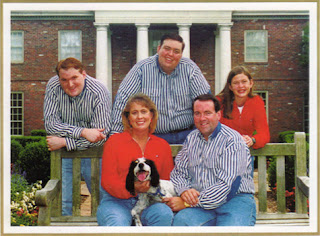 Eww. And that poor dog in the picture looks like it's being strangled!

It's a really sad, sickening story. And it's a true shame that he was never punished for it.

I may be in the minority here, but is it fair for that to be used against Huckabee in the presidential race? I say that, because if Chelsea Clinton went and did something horrific like that, republicans would go after Hillary, and we might be saying, "Yes, it's horrible, but Chelsea did it, not Hillary, so it shouldn't be used against Hillary." Know what I mean?

And on a totally unrelated note, there are a few new pictures of my adorable baby on my blog. But no worries, I won't mention her everytime I comment here. :)

Now THAT's a cute baby you got there Not a Hipster! And you can brag about her anytime in my comments:) On your thought about Huckabee, his asshole of a son and what he did to that dog - I know what you're saying, but just a few points: Huckabee, like many of the Republicans, uses his family as a sort of holier-than-thou way of saying: "Look how Christian we are." The Clintons, for all their faults, never used Chelsea as a political prop. In fact, they shielded her amazingly well when she was in her teen years in the very public White House environment. And say what you like about them, even people who HATE the Clintons admit they did a very good job raising Chelsea and she turned out to be a pretty good kid. Unlike say the Bushes who raised two underage drinking derelicts. Again, so much for the holy roller stuff. But the sticking point for me about Huckabee and this evil spawn of his: he wrote a book called "Kids Who Kill" and basically blamed Hollywood for the "culture of violence." Uh huh, yah, I don't think it was Hollywood that made that fat bastard torture that dog to death.

Has this story been reported? I think more people should know about it. How could they not even prosecute him after that??

Ok, JBK, I see what you're saying. I never knew Huckabee wrote a book about that...god. What a bunch of hypocrites.