The right-wing noise machine was something to behold this week. It started when Matt Drudge, the closet case Internet gossip columnist, ran a very unflattering picture of Hillary Clinton. (By the way, I hope I don't have to note that I don't care that he's gay, or even that he's a closet case. It's just really distasteful when gay folk like Drudge are also right-wingers and help a political party that would like nothing better than to throw them all into concentration camps. I digress).

The photo of Hillary was shot as she was campaigning in Iowa. It was a candid shot from the AP taken as she was out in the freezing weather in the middle of a conversation. It showed her looking exhausted, with lines on her face, bags under her eyes. Pretty unflattering picture taken in the middle of a grueling election process.

Drudge headlined it something like “The Toll of a Campaign” and then the fun started.

Rush Limbaugh – yes, Rush Fucking Limbaugh, the man who I believe the phrase “he's got a face for radio” was invented – jumped into action.

Fatass said: '"Does Our Looks-Obsessed Culture Want to Stare at an Aging Woman? Will this country want to actually watch a woman get older before their eyes on a daily basis?” 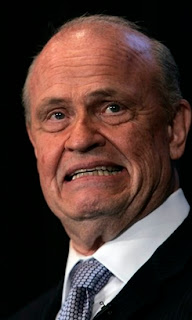 I hardly know where to begin. First, how about the ridiculous double standard inherent here. Hillary is a 60-year-old woman. I've seen her with the proper makeup and in a comfortable situation and she looks just fine for a 60-year-old.

Look at some of the men running – Fred Thompson, Rudy Giuliani, John McCain. Is that a bunch of beauties we are somehow supposed to enjoy watch aging?

But for Rush “To the Buffet” Limbaugh – who hasn't had a salad since the Nixon administration – to comment on someone's looks? Holy crap.

This three times married and divorced, drug-addicted (Oxycontin – also known as Hillybilly Heroin - was his drug of choice) piece of shit has some nerve.

By the way, his latest drug escapade, in case you forgot, was being busted with a case of Viagra that wasn't prescribed in his name as he was coming back from a “vacation” in the Dominican Republic. He's currently in between marriages, so why was this God-fearing right-winger carrying medicine for a limp dick? I thought these folks didn't believe in sex outside the holy bonds of matrimony?

And what was he doing in the Domincan Republic anyway? It's a notorious sex tourist destination for pervs looking to score underage prostitutes. 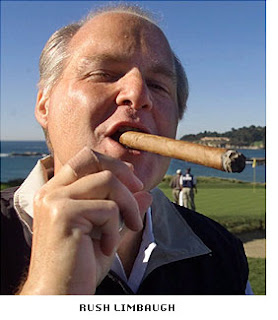 That's some resume to be commenting on Hillary Clinton.
Posted by J at 4:33 PM

How scared are they of Hillary!

I totally believe he's a pedophile, seems like the type.