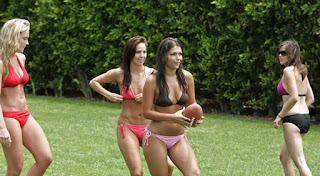 No, it's not another clip from “Calamity Jane,” it's the feeling a guy gets when he's badgered into watching “The Bachelor” as I was yet again Monday night. I went to my bud Sarah's house for her specialty, lasagna – and may I say, yum on that – and then, of course, we had to watch the show over an amusing little Pinot Grigio. Or two.

As whipped as I felt, I got some solace when the show turned out to be the penultimate episode of the season. And, as all these reality programs do the week before the finale, they basically run a clip show, gathering all the losers live on stage in a studio while some of the most embarrassing moments from the season are shown.

Well, the camera would occasionally pan the live studio audience and – talk about an advertiser's wet dream – it must have been 99 percent female.

But there were a few sad sack guys sprinkled throughout.

At least I've never done that. 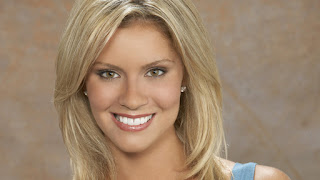 There really are some great looking girls on this show. Among the losers, I have new respect for Bettina, who has perhaps one of the most amazing bodies I've ever seen on television. Although she is a tad older than preferred. But God bless her and the way she looks in a bikini and in shorts.
Posted by J at 12:40 AM

Bettina? You have got to be kidding.

Hah unlike the times you've made me watch Dr. Who!!!! But yes the lasagna was amazing thank you.

Next week is the final where he picks the one!! I actually like the bachelor this year, he seems like a nice guy not a jerk.