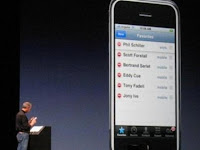 I'm not 100 percent sure what this means, but I like the sound of it:

Verizon Wireless has stunned the wireless world by announcing that by sometime next year it will open its network to “any apps, any device.”

There is a lot of fine print, but the essence appears to be that Verizon will offer two flavors of service: its traditional bundle, which typically includes a subsidy for phone purchase and various other features, and “bring your own” device service, which will be open to any device that meets “minimum technical standards.” The company went on to say:

"While most Verizon Wireless customers prefer the convenience of full service, the company is listening through today’s announcement to a small but growing number of customers who want another choice without full service."

An iPhone on the Verizon network instead of craptacular AT&T? Could it be?

That reminds me, I have to call the bastards. I was checking my account online and my New Every Two thing, which I'm sure is supposed to kick in June of 2008, is listed as October. Something is amiss.
Posted by J at 12:16 PM

That would be sweet if you could combine an IPhone with Verizon!!!

It doesn't sound like you will be able to use the iPhone because AT&T has the exclusive so they won't allow it. But there will probably be other phones like it that now you can use on Ver.