Judge a person by his friends – and his endorsers 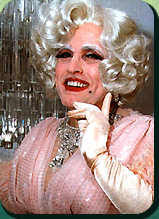 So Rudy Giuliani's camp is crowing about his endorsement today from right-wing Bible-thumping fucktard Pat Robertson.

I know the conventional wisdom is this will help Giuliani among the holy rollers who look suspiciously at the thrice married, cross-dressing former mayor of Sodom on the Hudson, who never made gay-bashing or abortion a big part of his plank – not that he ever could have if he wanted to be Mayor of NYC, of course.

And maybe it will help – but I also think it can seriously hurt Rudy among those moderate Republicans who were happy they finally had a candidate who didn't seem to question evolution and didn't want to lynch the gays.

But now he's in bed with Robertson, one of the sleaziest of the generally sleazy televangelist crowd.

And lest we forget, just a few days after 9/11, when the country was still reeling at the magnitude of the horror, Robertson and fellow scumbag Jerry Falwell (now roasting in Hell) blamed America – notably its general tolerance toward gays and abortion rights – as being the reason why the terror attack happened.

"God continues to lift the curtain and allow the enemies of America to give us probably what we deserve," said Falwell, appearing yesterday on the Christian Broadcasting Network's "700 Club," hosted by Robertson.

"Jerry, that's my feeling," Robertson responded. "I think we've just seen the antechamber to terror. We haven't even begun to see what they can do to the major population."

Falwell said the American Civil Liberties Union has "got to take a lot of blame for this," again winning Robertson's agreement: "Well, yes." 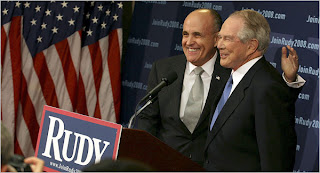 The sad thing is I used to actually like him until he started running for president.