"What Cats Know About War" 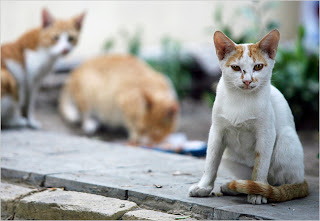 There's an interesting and bittersweet story in the New York Times today by John Burns, the paper's Baghdad bureau chief, about how he and his colleagues there started taking in stray cats from the neighborhood around the paper's compound - up to 60 at one point - and their attempt to try to alleviate at least some misery in the midst of the debacle caused by George W. Bush:

IT was a bitterly cold night in the Baghdad winter of 2005, somewhere in the predawn hours before the staccato of suicide bombs and mortars and gunfire that are the daily orchestration of the war. Alone in my office in The Times’s compound beside the Tigris River, I was awaiting the telephoned “goodnight” from The Times foreign desk, eight time zones west, signaling that my work for the next day’s paper was done.

That is when I heard it: the cry of an abandoned kitten, somewhere out in the darkness, calling for its mother somewhere inside the compound. By an animal lover’s anthropomorphic logic, those desperate calls, three nights running, had come to seem more than the appeal of a tiny creature doomed to a cold and lonely death. Deep in the winter night, they seemed like a dismal tocsin for all who suffer in a time of war.

With others working for The Times in Baghdad, I took solace in the battalion of cats that had found their way past the 12-foot-high concrete blast walls that guard our compound. With their survival instincts, the cats of our neighborhood learned in the first winter of the war that food and shelter and human kindness lay within the walls. Outside, among the garbage heaps and sinuous alleyways, human beings were struggling for their own survival, and a cat’s life was likely to be meager, embattled and short.

You may have seen Burns in TV interviews; he's a Brit, has a mane of unruly silver hair, and is considered one of the best war reporters in the business.

As Burns ends the story, relating how he took a few of the cats back with him to England at the end of his assignment, the disaster that Bush has unleashed is brought home when, waiting for his flight at the Baghdad airport, an Iraqi doctor comes over to speak to him:

All about was hubbub, with hundreds of angry, fearful Iraqis struggling to secure their own passage out. The cats seemed terrified, so I fell once more into my anthropomorphic mode, offering them a quiet discourse on what lay ahead — the 3,000-mile air journey, detention in the quarantine center and, ultimately, liberation into a green and pleasant land where they would be full citizens, never again wanting for shelter, warmth and food.

A small crowd of Iraqis had gathered, and one among them, a middle-aged man who introduced himself as a physician traveling to Jordan to see his ailing mother, knelt down beside me and asked, in halting English, if I’d mind a question. By all means, I said. “Well then,” he said, his face breaking into a sad smile, “what I want to ask is this: This proposal you make, is it for four legs only, or also for two? Six months’ detention, British passport, free to stay, guaranteed home, this is excellent. I will take, and many other Iraqis, too.”

At least they're trying to save some of them, but I can see the army's point about not feeding them or adopting them too.

Why do I wonder if there are thousands of homeless cats n England that he could save instead of these??

INSTEAD OF THIS SAD FIGHT

Instead of this sad fight outside
I´ll sit beside thee now;
Thou art my joy, my special pride,
For which I make the vow:

Though crucial are affairs of state
I´ll not neglect my love,
True though the crisis has grown great
And problems born thereof.

To wrap myself into the cause
Neglectful of this sweet
Proximity, reveals the flaws
Of politicking´s beat.

The evil men promote their ways
Nor none can insulate
Himself entirely, from the craze
Secure and lock the gate.

An evil lurks within the land
That souls are best resisting,
Yet I would feel a reprimand
And sense eyes over-misting,

Did I not spare that little time
For us to be together--
Horrible, dangerous this clime,
But that´s the usual weather!