I like to occasionally throw out some random thoughts to the Too Saucy readership, so here we go, but note I have had some single malt Scotch tonight (it's actually Thursday night, but technically Friday as I write.)

Someone asked me today what TV shows I watch on a regular basis, and I suddenly and sadly realized there isn't a lot grabbing my attention these days.

And that's about it.

I sometimes get dragooned into watching "The Bachelor" (ABC) on Mondays, and, of course, I watch a lot of movies on my bazillion premium movie channels, for which I pay Time Warner a hefty monthly fee, but there really aren't a lot of shows that make me want to watch or record them on a weekly basis.

I do like the aforementioned "Mad Men" though. If you don't know it, it's set in an advertising agency on Madison Avenue in 1960, just as the U.S. was really changing. In fact, a few subplots were on the Nixon-Kennedy race. 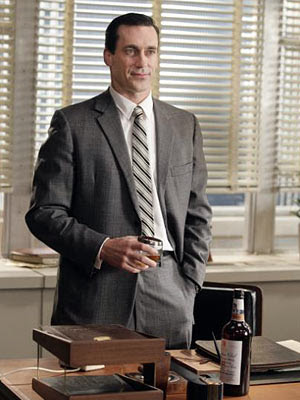 It really is a fascinating look at a time in the country before things got stirred up with the counter culture and the Vietnam War and the assassinations and the civil rights movement and feminism, but people were maybe just beginning to realize things weren't quite right.

You see the rampant sexism and a consumer culture that was already getting a little hollow and the conflict between what is portrayed as a soul-deadening life of the suburban housewives compared to what they somewhat jealously saw as the exciting big city work lives of the ad men in the title.

The show has really great sets and costumes, and it's the little details that make it.

On Thursday's episode, there was a moment (and it was really just a throw-away scene) where a wife suspects her husband of cheating and she tells her friend she found out when she opened the phone bill and there were a lot of calls to Manhattan and the bill was an astounding $18.

And they showed the bill's envelope and it was the old New York Telephone logo (before that company went on to become Bell Atlantic, then NYNEX, and now, of course, Verizon.)

And those guys all drank at the office and had long tipsy lunches. Damn, I'm jealous of that.

(That's why we were drinking single malt Scotch, by the way. I always like to get in the atmospheric mood when I watch this show.)

But many of the characters smoke a lot too, as people did in those days - even in elevators and train cars and in the offices. Even pregnant women. Ugh.

Anyway, the first season just ended, but it's coming back for a second, so if you haven't seen it yet, I recommend you catch the episodes On Demand or look for the reruns before the new season begins.

And on a totally random note, I have my homepage set up as i-Google. That's a version of Google where you can personalize your location and get the local weather forecast, headlines, easy access to your gmail account, etc.

And they always include a couple of tips in a section they call "How to of the day" - and for some reason they are usually the most bizarre things. Today, and I swear I'm not making this up, it was:

How to Braid a Horse's Mane

How to Make a Coffin

Oookay. I'm sure those are a couple of things that will come in handy. Huh? Not to mention being bizarrely geared to both the 8-year-old girl crowd and the morbid-as-hell set.

Is there some sort of overlap with those groups I'm not familiar with?
Posted by J at 1:08 AM

Do you know that the girl who plays Peggy (she just found out she was pregnant on the show) played Zoe on "West Wing" - the president's daughter! She looks so different in Mad Men!!

Oy does ANYONE really need to know how to make a coffin? And maybe like 100 people how to braid a horse mane!!! How weird lol!

That guy with the silver hair was on "Sex and the City" for a little while.(He fell in love with Carey of course! :)